It’s been a great month, where I was traveling and had an opportunity to visit the branches freely as travel restrictions and the threat of Covid-19 the global pandemic is slowly dying down. I pray that this threat has ended. I also feel for the citizens of Ukraine who are facing the Sudden invasion of Russia this might be a classic example of a stalemated leadership. Where consistent power the leader might lose focus of his Endeavours as it has been stated in the Book “10 rules of successful Nations.

On our global front, congratulation to the team as we have successfully reached a landmark of 100 rigs dispatched in the financial year 2021-2022. 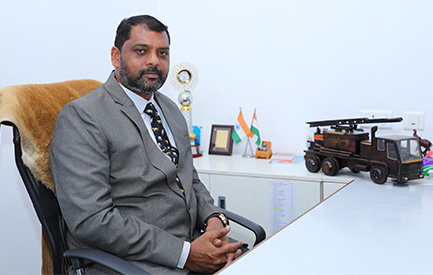 This is the second consecutive year we are reaching the feet of 100rigs even though we have had the challenges of the pandemic in 20-21 and an aggressive second wave in 21-22which had major impacts on supplies and material mobility the coordination and planning of the team is highly appreciated.

Oman is a middle-income economy that remains significantly dependent on dwindling oil resources. Oman performance well by the Middle East and North Africa regional standards in terms of its operating environment. Oil has been the driving force of the Omani economy since Oman began commercial production in1967. The oil industry supports Oman’s modern and expansive infrastructure including electric utilities, rods, public education, and medical services.

PRD has a strong foot in the development of oil wells, our Rigs are widely used for the initial Hole drilling in oilwells thus it reduces their overall operational cost and time. If new oil resources are identified in Oman our rigs are used to install the concrete poles for the HV Over-headline from the power station to the oil pads/camps.

Oman has copper, gold, silver chromite, lead, nickel, manganese, and zinc mineral reserves. These reserves are undeveloped due to a preference for the growth of  oil sector. Now the government has been expanding mining activity in the country and providing approval for new mines.

PRD RIGS with its years of experience made a customized and Versatile Geotechnical drilling rig. PRD GD5 ME is a rig that has capsulated the voice of the customer as a rig which mage for various applications such as:- 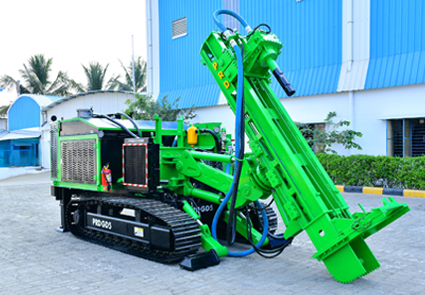 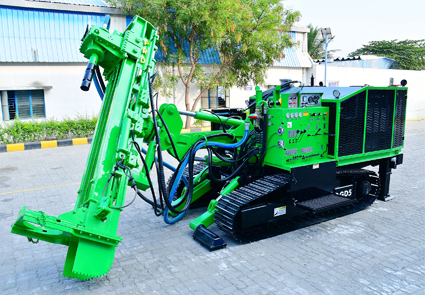 The GD5 ME has been specially designed to suit smaller, narrower tunnels, and its crawler mounted features high ground clearance which enables crawling on steeper slopes maximum offroad. For maximum durability, the rig is equipped with a heavy-duty feed system.

PRD GD5 ME is an indigenous product to compete with the TOP international brands that are established in the market for the constructions industry. With advantages in functionality and superior technology, PRD aims to offer competitive prices make in India Price for the customers.

A dual Primer mover (Engine + Electric) option has been given since the machine is going to operate in an underground tunnel. Our machine was tested for various parameters including various angles of drilling jet Grouting auger in our field trail area. We trust we can capture the market with a significant market share and be able to build confidence.

TATA HITACHI – 20 TONNE – LIFTING MOVABLE CRANE – the life of the crane is 12 years serviced with new features by using our inhouse facilities & available parts, this was led by Mr. Suresh Service Head and was executed under the guidance of our Technical head – Mr.Erle.This was a joint project which involved the coordination of various teams like the mechanical, electrical, Bodywork, and hydraulic teams. Took a total of just 30 days to fully revamp this mobile crane. The features are as explained below. 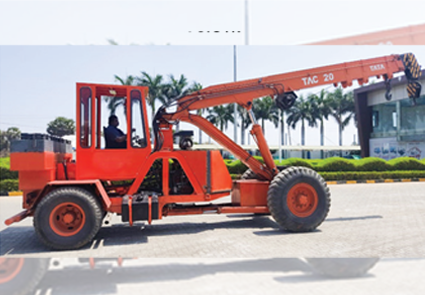 (a) New Cabin was designed as user-friendly, comfortable, and safe to operate for heavyweights with large size parts. The Crane cabin is a critical facility to ensure operator safety.
(b) 140 HP – 4 Bore Cylinder – Ashok Leyland Engine Used for More Pull up with High Torque. The 4 cylinders work continuously and are extremely refined.
(c) In-House Meter Boards Designed to accommodate all features of LED lighting, Horn, ignition, Gear Ratio, and Pressure Meter. 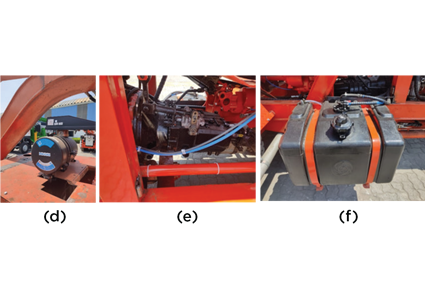 (d) Single-Stage Air Filter – Ashok Leyland Mounted filtration system ensures clean air enters the Engine for Better performance.
(e) 7 Speed – Internal High Pressure – Gear Box used to deliver engine speeds of up to 9,000 rpm and can transmit a torque of up to 550 Nm
(f) 75 Ltrs Capacity Plastic Diesel Tank used for the crane which is picked from nonmoving materials. Plastic Diesel Tank is optimized utilization of fuel storage and supply which will have zero level of corrosion.

Our first rigs which was supplied to a new market. It’s a privilege to add another country to our Global presence in the west indies. Due to the pandemic Situation, we were not able to have anyone physically go and commission and train the customer.

So our Service head Mr. Karthikeyan – S had organized a virtual commissioning program. Which had both Practical and theoretical sessions. we were able to assist the Customer virtually till the Time of drilling the hole. during the training, the topics of familiarization of the drilling rigs and rig components were primarily covered. 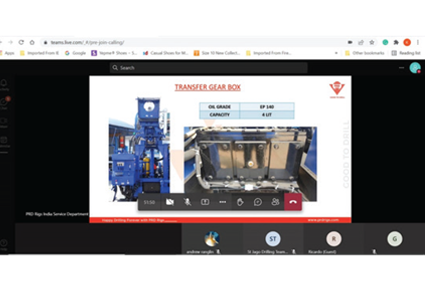 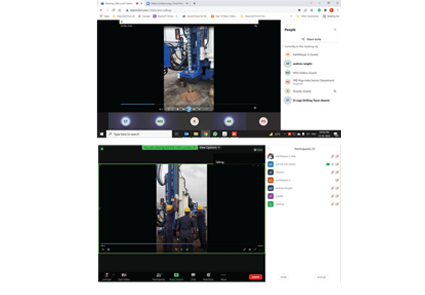 After this, the team had moved to the Site to Start the Drilling and this whole procedure for the first time was done Virtually by PRD. We appreciate the new initiative and efforts by the time as we are truly adaptive to the new age of digital technology.

What Is Air Core Drilling ?
Air core drilling uses three-bladed steel or tungsten drill bits to bore holes into  unconsolidated ground and is used when safe and clean removal of sample material is paramount. Air Core Drilling is an inexpensive method of exploration drilling that can be employed when safe removal of sample material is paramount. Where possible, it is preferred over RAB (Percussion rotary air blast drilling) drilling and unlike the diamond drilling method, which withdraws a small diameter core of rock from the orebody, air core drilling is much faster and more cost-effective.

As the name suggests, air core drilling relies on compressed air to flush cutting samples out of your drill holes. This enables the safer collection of samples without unnecessary damage to the surrounding area and results in a more effective analysis sample.

How Does Air Core Drilling Work?

Air core drilling uses a three-bladed steel or tungsten drill bit to penetrate the weathered layer of loose soil and rock fragments. The drill rods are hollow and feature an inner tube with an outer barrel (similar to RC drilling). Air core drilling works by using small compressors to drill holes into the weathered layer of loose soil and fragments of rock. After drilling is complete, an injection of compressed air is unleashed into the space between the inner tube and the drill rod’s inside wall, which flushes the cuttings up and out of the drill hole through the rod’s inner tube. These samples then pass through a sample hose and into a cyclone, where they’re collected for review and assay.

Where is Air Core Drilling Applied?

Air core drilling is a valuable method of drilling for organizations looking to reduce the risk of sample cross-contamination. It’s commonly used in first-pass exploration drill programs on the unconsolidated ground, with an optimal depth of up to 300 meters.

What’s The Difference Between Air Core Drilling and RC Drilling?

While the equipment used in air-core drilling and RC drilling is similar, the mechanisms involved are different, so each is useful in different situations. Both involve the use of compressed air to flush out samples. However, air core drilling is ideal where the unconsolidated ground is present. RC drilling on the other hand, uses the added element of concussive force to power the drill bit, pulverizing the rock in its path. This makes RC drilling ideal for harder ground. RC drilling is also typically able to achieve greater depths, and better-quality samples, than other types of drilling. 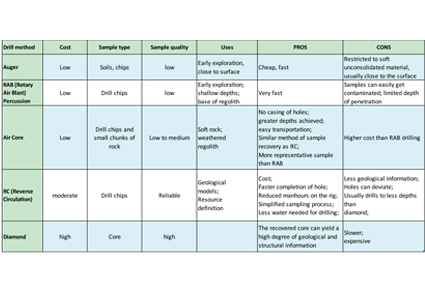 Radio remote controls are quite extensively used in construction, manufacturing, and equipment-based industries. With upgradation of technology Radio Remote control systems have undergone a tremendous change for the better in terms of safety, reliability, user friendliness, maintenance and inventory of spares. Initially, remote controls were connected with wires, which still involved the operator staying in close range. With time, remote control devices have been configured to go cordless and effective with increased capacity and control authority over the equipment. They can even manage operations from a distant location, enabling the feasibility of working and deconstructing a two-person job to single-person handling. 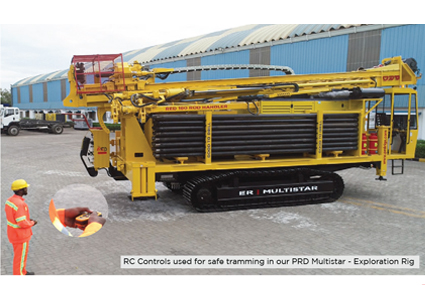 The wireless radio controls generally increase productivity and safety during operation while reducing downtime. While operating on heavy equipment and machinery, there is always a risk to human and plant safety. Radio remote controls serve as a value-added solution to this underlying problem. 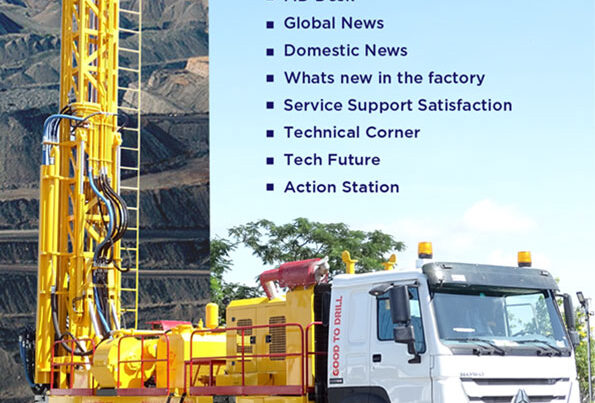 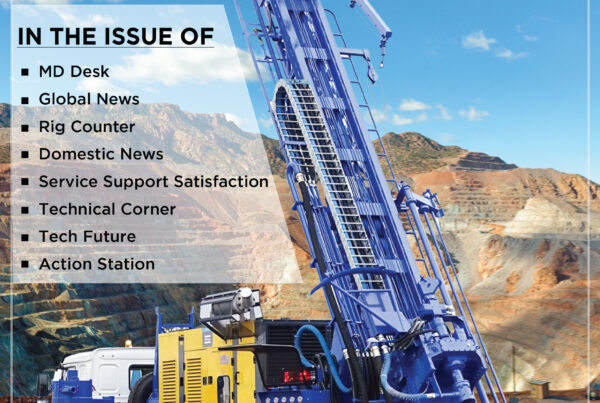 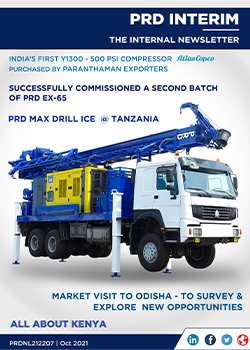